When an interest rate decision looms, portfolio managers (PMs), traders and dealers build a matrix of possible outcomes, decide their expectation and work out how to maximise their upside, while minimising their downside. That hinges upon an understanding of the market’s view, and its likely reaction to an outcome, to understand the risks inherent to any trade. Sell-side research and market intelligence can be fundamental to investors in setting up these preparations. If the outcome is unexpected, that also needs to be handled. James Athey, senior portfolio manager at Aberdeen Standard, Sean George, CIO at Strukturinvest Fondcommission, and Mattias Remnefjord, product manager for fixed income at FIS, outline the scenarios for long-only and alternative investment managers, and their investment bank counterparts.

Dan Barnes James, can you start off by telling us, what sort of scenarios you have to plan for if, as a central bank, interest rate decision coming up?

James Athey Sure thing. Yeah, unfortunately Dan, gone are the days where it was a simple case of, ‘are they on hold? Are they going to cut? Are they going to hike?’ We now live in a world of overt, central bank communication, and that means we need to consider some of the options in between, which is to say, we have these slightly spurious sounding concepts, like a hawkish cut, or a dovish hold. So actually, the number of options is a little more complicated. But essentially our behaviors, the analysis that we have to do around those risk events, is a microcosm of what we’re trying to do the rest of the time. And that’s really around two key concepts; valuation and asymmetry. So essentially, what we need to understand is, ‘what are the market’s views of what’s likely to happen? What are the market’s views of the market’s likely response to those events? Where is market positioning?’ And therefore, we can try and understand where the risks are and positions that we may be running, which may be affected by the outcome of those decisions.

Dan Barnes That’s very good, thank you. And Sean, as a hedge fund, do you think about things differently in any way?

Sean George We go about things differently. Some of our positions are longer term like theirs, but at the same point in time, there can be a fair amount of alpha to collect after an event. But the way things have shaped out this year, there’s been the reaction function that we’ve assumed, when we’ve modeled what we think is going to happen in the different scenarios, and then we have a portfolio set up for multiple scenarios. And the reaction function is something completely different than what we had modeled. So, we are more patient at this point in the year, because we want to see the market reaction play out, and we’ve just let it run sometimes because we don’t agree with the market reaction, but it’s worked out with our position. But we generally try and collect alpha and be a little bit faster than other people. That’s the nickname, ‘fast money,’ for hedge funds.

Dan Barnes Absolutely, of course. And Mattias, how do you see sell-side counterparts potentially preparing to assist their buy-side clients and also, of course, in the interdealer market?

Mattias Remnefjord If you have an event like this, like a rate decision and the outcome of that, it’s very important that when it heats up, the sell-side banks have their trading system lined up, in terms of position management, but also that they have to figure out beforehand the risks with that sort of move. If there’s a rate decision, there might be a ‘steepner’ or a ‘flattener,’ or if there are some moves around the curve, some 2 to 5-year time flies, fx, it should not be such a surprise if there is a certain sort of a steep hill to curb the outcome of that. That’s the change of the curve, but then you also have the different ways to look at from the credit side, from the issuer. So, they need to keep track of what happens if the spreads are widening? If you have the CCC vs BBB, fx, to look at that from the insurer side. Nowadays, you need to keep track of the liquidity and the funding side to see these kind of basis risks that you might be exposed to. We saw at the end of September in the US, the liquidity squeeze in the repo market, but when things heat up, it is very important that the sales guys, the banks, can still provide the service to their buy-side. In terms of contributing prices to the extent that they want to, I mean, if it’s a shaky market, maybe they pull back, but we’ve seen that it can pay off if you’re out there in the market, even in a shaky situation, that you’ve been there when it’s heated up. From a pricing perspective, when you’re trading several different asset classes, it’s very important to have consistent pricing across different segments, e.g: if a trade is in corporate bonds government, but also if you mix that with things like on the swap-side, cross-currency swaps. So, you need to have a consistent pricing and a good view, but in terms of a decision, the impact should not come as a surprise, you should have done your homework before.

Dan Barnes That’s very good, thank you. And James and Sean, what sort of information do you use in the preparation phase for this from your bank counterparts?

Sean George I’d say it’s an ongoing dialog for us at least. Understanding market positioning is a big point. Understanding where are the weaknesses. Understanding, many accounts have had good years this year and we’re at the middle of November. The risk-taking appetite right now is not great, and it’s not great at the bank-side going into year round. And many banks have also had good trading years. So, just understanding the market dynamics and being prepared for further impacts on pricing. There’s been a lot of things this year that have reacted very strangely, but you have two central banks in the market as well, and then you have buy-side accounts like us, reacting to what they’re doing, agreeing or not agreeing. Those dynamics are not something that you get delivered to you; it’s an ongoing process of dialogue across the counterparties, or even some of my competitors, which I’m friendly enough and that I talk to.

Dan Barnes Sure. And James, what sort of information are you using in the long only position?

James Athey Yes. Sean’s hit the nail on the head. Essentially, we’re using the street because in aggregate, they see a heck of a lot of flow, if not all of the flow. And us, as a single buy-side firm, we don’t have access to that via any other means. So first and foremost, as Sean’s already said, there is an ongoing dialogue, but particularly when there are risk events, particularly when there are known events in the economic calendar, when there’s likely to be volatility in the aftermath, it becomes that much more important to have had these conversations, to understand who’s been buying, who’s been selling, where are the positions, and what might they be? Again, back to the asymmetry; where’s the asymmetry around potential market moves in the aftermath of the decision? So absolutely, that’s a key input for us in able to sort of build that deep, textured view of exactly how the market is positioned, and how it’s likely to behave under various scenarios after the event itself.

Dan Barnes And what’s the biggest risk, do you think you face in the planning stage?

James Athey Well, obviously, not having the right information is a huge risk. Markets have become incredibly complicated, not just in terms of central bank distortions, which are a huge issue, but also in the number of instruments and the potential uses for those instruments, because we have more liquidity in the system. Trying to make comparisons through history about the extremity of positioning is difficult, because you’re comparing under two different scenarios. It could be quite easy to have a view on positioning, which turns out to be somewhat false because the context isn’t right.

Dan Barnes Is that the same for you Sean?

Sean George Our problem, it’s exactly what I said. Our biggest position from the long side is CSPP bonds; bonds that the ECB will actively be purchasing and hopefully the exact bonds we own. But bonds that fit in the framework; modeling that is absolutely impossible. Like how is that asset, or how is that part of my portfolio going to perform going forward? Because, I have really, from June forward, with these particular bonds, and then I have the last time, but the last time they were in, it was a completely different scenario than it is now. Understanding and tweaking and using the right proxies, and then you get what we get back from the model, and then we have to actually haircut that, because the volatility is actually higher a lot of times than it should be in the model, because it is not taken into account that the ECB will be there, when the volatility picks up. I have a young quand with me who is very, very bright, but, when you haven’t seen these cycles, I’ve been doing this for almost 24 years now, volatility is. Understanding what the model says and what the actual volatility is, is different.

Dan Barnes That’s great, thanks. I think we’re gonna talk about trading next. I’d like to thank Sean George, James Athey, and Mattias Remnefjord, for their time and insights, and of course you for watching. To watch the next section of Trader TV Live, go to TraderTV.NET.

Improve your trading in complex instruments 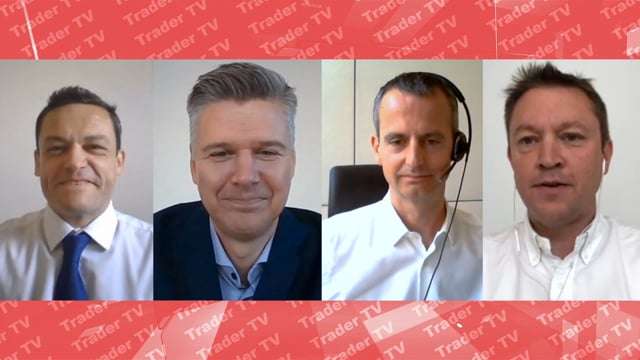 The future of the sell-side trading function